Ready to hone in on your transformational leadership style? Episode #33 with Senior Director of PR at Universal Orlando Resorts Alyson Lundell will help you do just that.

Confident leaders aren’t afraid of transformation and overhauling everything.

They’re not afraid of stepping out of the spotlight to give their team a shining moment.

They’re also not afraid to totally surprise and delight their people at conferences with larger-than-life transformers! The picture says it all, but you’ll have to listen to the podcast to hear the full story. 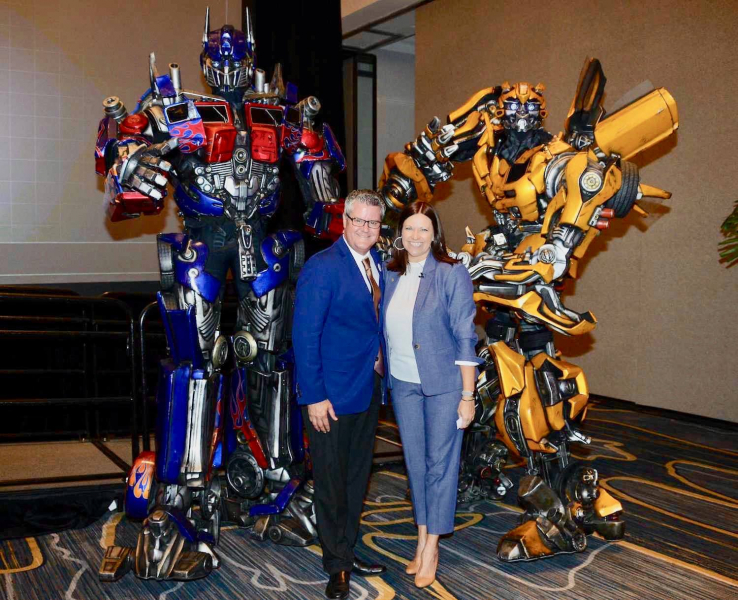 Earlier this year, I had the honor of keynoting at the Florida Public Relations Association (FPRA) where Alyson Lundell the Senior Director of Public Relations at Universal Orlando Resorts was inducted as the association president. Before that, Alyson brought me in to speak and spend a full day with her PR team at Universal.

I’m so excited to share my exclusive interview with Alyson on episode #33 of The Next 24 Hours, because she’s sharing the way that she leads differently to build a dynamic, bonded team and to adapt quickly in the rapidly changing world of Public Relations.

Tune in to hear:

You can find my interview with Alyson on Apple Podcasts, Spotify,or Google Play.

And to learn more about the Florida Public Relations Association and Alyson’s work with them, click here.

Alyson: [00:08:46] Sure. So, yes, you’re right. I’m an active member of the Florida Public Relations Association, and we are twelve hundred members strong across the state of Florida and all walks of the PR industry. So people from travel and tourism to non-profit to agencies and we all come together and leverage our our membership just to talk about issues, trends, just learn and better and grow ourselves as professionals. And and frankly, that the thing that I love about FPRA is that it truly is this family of friendships and mentors that all come together and serve one another and help each other. And in particular, it’s very important to my family because, as you mentioned, my dad was a member for several years. He was the president of the association 35 years ago. And during the past conference in August, where we install our new board of directors, I was installed by my dad as the president for the year ahead. Ahead.

Previous: I’m an Inspirational Speaker, and I Don’t Believe in Self-Help.
Next: Stop Working for the Weekend, and Start Living Your Life.