There is one thing that stands in between the person we are now and the person who we want to be: DISCOMFORT.

Episode #62 on The Next 24 Hours is all about how to get comfortable with being uncomfortable, and I have a very special guest who is sharing his story.

Six years ago, at his New Student Orientation at Western Michigan University, Noe Rizo saw me speak. The moment after my keynote ended, he knew what his calling was: To become an inspirational speaker.

At the time, though, he was working through being shy (while also wanting to meet new people.) But when he heard in my keynote that the beginning of college was the perfect time to write a new script and become who he wanted to be, he embraced it like nobody else.

He joined every social club he could, went to every meeting, and even had an amazing experience he would have never dreamt possible sitting in the audience as a new student. (Listen to the episode to find out what it was!)

In 2019, he joined us for a keynote writing workshop in Cincinnati, and today, he’s living his dream and finishing up his Masters in Communication while creating videos on his YouTube Channel (The Wolf Pack!) to motivate and inspire people who are ready to make a change in their life. 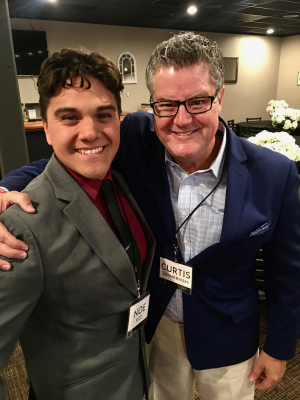 Listen: There are so many people who have told me that they want to do what I do. But there are very few who are willing to put in the work and claim the starring role in their life so that they can share their gifts to inspire others.

Noe is one of those few. I am humbled to think that because my message inspired him, his message is now inspiring others!

So, I invited him to be a guest on my podcast. It was an amazing interview, but what really blew me away was this video he created to tell his wolf pack about the opportunity he had.

Here’s what we’re talking about on this episode:

Find this episode on Apple Podcasts, Spotify or Google Podcasts.

And as a personal favor to me, I want your help to help his dream come true! Watch the YouTube video he made about our conversation, give it a like, leave a comment and then share his channel with someone you care about.

Thank you in advance—this young man has worked very hard to make a difference in others’ lives.

Previous: How Zak Morgan Followed His Passion and Teaches Kids to Believe in Themselves