How His Insomnia Gave Hope to Thousands

Have you heard of the band Telehope? I’ve been honored to mentor them as they rise to national success.

I remember the first time I heard Ben play the piano. He was totally improvising, and I could tell that for him, the piano is an instrument for getting the music inside of him out into the universe.

Ben first discovered his love for composing music in high school as a method for coping with insomnia. His sleepless nights led him first to learning the piano, then to recording his own compositions.

Today, he owns his own audio production business and manages and plays in Telehope, an up-and-coming band he started with his friends four years ago.

What’s their dream? “To play shows all over the world, bring joy to people, and make a living doing that,” Ben told me.

I first met Ben through a longtime friend of mine. Because he knew I had turned my dream job into my real job, he emailed me to ask if we could meet up. I was thrilled to help—I know that people who take a leap of faith to reach out to mentors grow faster than everybody else.

Immediately, I loved how uncompromising Telehope is in their mission. So many young artists are looking to make a quick buck regardless of how they have to change their art. After talking with Ben I saw the exact opposite. He shared with me the story of how Telehope got their name:

“A couple of years ago, we got a message from a girl who followed our band on Instagram. She told us that she was struggling with depression and had planned on taking her own life until she heard one of our songs.”

That was the turning point for the band. Realizing the power that music has to bring hope to people in dark places, they changed their name from Undivided to Telehope.

“Our goal for Telehope is in the name. It’s a combination of the words ‘telescope’ and ‘hope.’ We like to think of our music as the telescope that zooms in on the hope in the distance and draws it nearer to our fans.”

How do they do it?

“We try to make every song convey a message, one that is catchy but more meaningful than the lyrics you hear on the radio. We don’t release anything we’re not 100% proud of.”

I also love Ben’s business-minded strategy when it comes to the band.

“Everything has a purpose whether it be a song release, show announcement, or video post. We always ask: Why am I posting this picture? Why are we playing this show?”

Their purpose has paid off: Since re-launching as Telehope a year ago, they sold out three shows, have over 300,000 listens on Spotify, and their songs have played on TV shows such as “Born this Way” on A&E.

“The secret to our growth so far is hard work, goals, not over-saturating our local market, research, and seeking advice from mentors,” Ben says.

Ben first reached out to me for advice when the band was selected to perform at NACA  (National Association for Campus Activities), a conference for college students to meet, watch, and book entertainers to come to their school.

As a previous NACA performer myself, I had the chance to sit down with Ben to debrief him on what to expect. He asked questions, I asked questions, and together, we created a strategy for maximum success at the conference.

Not only did Telehope have a strong marketing presence at the event—they were chosen from a pool of 500 performers as a showcase act. (A huge achievement for first-time performers!)

“Our biggest wins at NACA were growing our fanbase and booking several college concert gigs,” Ben told me.

Ben shared a couple things from our meeting that were most valuable for his band at NACA. They can apply to anyone in sales:

Telehope didn’t just book gigs, they built relationships and made fans. (Which by the way, led to booking gigs!)

2. Delegate so everyone works in their genius.

Ben brought along non-band members to talk shop at the booth while the band members interacted with students.

Each of the band members agreed on a consistent message regarding price and brand. By making it easy to understand the what, who, why and how of their offering, people booked. People buy when they understand clearly!

2018 has been a big year for Telehope: They released their new album “Hello to the Now” in June, signed with a booking agency, and they’re performing at colleges across the nation. Soon, we’ll be able to say “we knew them when…”

I loved working with Ben during our VIP Day, and I would love to help you or your team become rock stars too.

I still have a couple VIP Days if you would like to spend one-on-one time with me. We will work together to refocus your career path, launch a project idea or take your dreams to the next level. Click here to learn more!

Photo by Daniel Chimosuro. Ben’s on the far left!

Previous: How to Present a Message that Sticks
Next: He Does NOT Celebrate Valentine’s Day 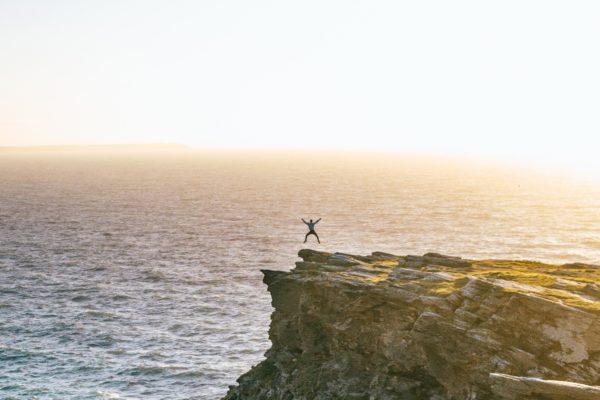