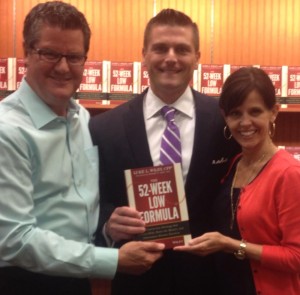 I’d like to introduce you to my friend, Luke Wiley, CFP, and author of The 52-Week Low Formula: A Contrarian Strategy that seeks to Lower Risk, Beat the Market, and Overcome Human Emotion.

Luke is a rockstar in the financial industry, an adoring father of four, and he has been happily married for 17 years to his best friend, Melissa. But Luke, like many successful people, didn’t start off that way.

His parents were only 18 years old when Luke was born. They did the best they could, but they didn’t have much, so Luke grew up shopping at the Salvation Army. Even though he didn’t have the nicest clothes, he had a drive for success that his parents always encouraged.

For example, when Luke was a kid, he took up an interest in BMX racing, and his dad signed him up to compete.

“There were 15 other kids, and they all had the best bikes and the best apparel,” said Luke. “I had a Huffy bike, my blue jeans, and my dad’s helmet on.”

Luke knew he looked poor and unimpressive standing next to the other kids at the starting line, but he refused to let that be a reason to lose. His heavy bike would take far more effort and strength to ride through the course than one of their light-weight BMX bikes, but Luke knew that in that moment there was only one thing that would make the difference between his winning and losing: the effort he gave.

And Luke has been pedaling like crazy ever since. When he was in college, a brokerage house interviewed on campus. As soon as Luke heard that as a financial advisor you can have everything you want and need as long as you help enough clients get what they want and need, he knew it was for him.

“I started at Merrill Lynch at 22,” said Luke . “They call the beginning of your career 1,000 days of pain. If you can work for three years like few, you can have a life like few. So I did it for five years.”

What did Luke do for those five years? Endless cold calling to bring in new clients. And though Luke is now incredibly successful in the financial industry, he saw a lot of failure during those 1,000 days of pain.

“I’ve been rejected by at least 60,000 people on the phone,” said Luke. “In my career, I’ve realized that if you are willing to do what most individuals cannot or won’t do — receiving repeated rejections — your success is unlimited.”

It is this attitude — this lack of fear of failure — that has helped Luke design the financial formula for his new book, The 52-Week Low Formula, which builds out a strategy for buying low and selling high.

This formula was inspired by an event on March 7, 2000, when a major consumer products manufacturer company’s stock dropped over 30% in twenty-four hours, shocking Wall Street. 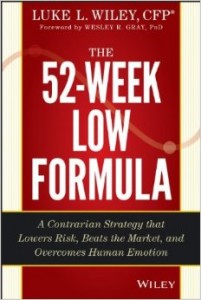 “I had a client call me the day it dropped, and he asked me to buy him a considerable amount of shares. I remember trying to convince him that he shouldn’t. I really thought he was going to be sorry. But then the antibiotics kicked in and the stock ended up splitting twice since they bought it, and it has made him a huge amount of money.”

Luke knew then that he needed to change his strategy, focusing on companies in their 52-week low. After studying their balance sheets, Luke would buy the stock and watch as the tide came in, raising the stock from its low and creating a large profit margin.

It may feel dangerous to invest in businesses that are hitting their low, but Luke isn’t afraid of businesses in a temporary state of failure. In The 52-Week Low Formula, Luke references his extensive research to show individual investors how buying low, even when it might look at first glance like a company is doomed, can be to their benefit.

Regardless of whether you are a savvy investor or someone who has always been afraid to get into the market, this is a must-read to take your financial future to the next level.

Luke is passionate about sharing this philosophy and his persistence through failure with other investors and clients in his book, but he also knows that it is important to let his children see how he works through his failures.

“There were some sub-courses I had to pass before I could sit for the Certified Financial Planner exam, a 10-hour test with only a 64% pass rate, and there was one subject that I kept failing,” said Luke.

Every time Luke failed, he came home and told his children that “Dad didn’t pass again.” But though he had to admit his failure to his kids time and time again, when Luke went to take the official CFP exam, he passed on the first try due to his relentless studying for the sub-course. In this success, Luke was able to show his children what his failure ultimately led to.

Are you willing to fail again and again in the pursuit of success?

Remember: you get to decide how hard you pedal.