What is Effective Leadership? Sharing Off.

What is effective leadership? It’s recognizing your gifts and your skills and sharing them off.

The other day, my daughter and I were enjoying Cincinnati’s famous Graeter’s Ice Cream. There were two or three kids there sitting on the curb, and I walked over to them. I pulled a 50-cent piece out of my pocket and did my signature coin trick. As always, at the end of the trick, I let them keep the coin. As we got in the car, my daughter said to me:

I quickly replied, “I wasn’t showing off—I was sharing off.”

And there’s a huge difference between the two—just not in the mind of a 15-year-old who has seen me do this hundreds of times. Regardless, I took the opportunity to explain to Mirabelle what I meant.

Showing off is when you do something because you want everyone’s attention. I have spent most of my life as a performer, so being deemed cool by three teenagers at a Graeter’s is the last reason I do my coin trick.

Sharing off is giving something when you know you won’t get anything in return.  It’s giving just to make someone smile—whether that’s a song, a poem, sage advice or a YouTube video. I do magic tricks for people because they have an incredible way of breaking down barriers and making people feel valued.

I’ve done my coin trick for waiters and waitresses, receptionists at a hotels and gate agents dealing with people whose flights were cancelled—and I always give them the fifty cent piece at the end of my trick.

GIVING AWAY THE MAGIC

The real magic isn’t in the disappearing coin: it’s in my coin trick’s ability to make people feel noticed and appreciated.

Several years ago, I was staying at a beautiful hotel in New Orleans. I pulled my car up to the doors, and an enthusiastic gentleman greeted me and helped me unload all of my bags. He was the kind of employee that every hotel owner wishes they had. His joy was tangible, and he made everyone feel totally welcome. So I said to him:

“You give all day, so I want to give you something.” I did my trick and left him with the 50-cent piece.  I didn’t think much of it, since I share the trick with strangers often. I checked in and made my way to my room.

From my balcony, I could see the man who had helped me with my bags.

I saw him reach into his pocket, take out the 50 cent piece, smile, and put it back. Over the next few minutes, I saw him do this six times. I kid you not!

A year later, I stayed at the same hotel to speak at another conference. When I pulled up in my car, guess who was standing there? That’s right—the same gentleman I had given the coin to one year before. He greeted me by name and pulled the 50-cent piece out of his pocket to show me.

He didn’t remember my name because I was a speaker or an author—in fact, I don’t think he knew what I do for a living. To him, I was just a guy who shared my magic.

I couldn’t help but think how easy it would have been for me to miss the opportunity to share off. If I had been in a hurry (or if I had been an arrogant jerk,) I would have wanted him to unload my bags as quickly as possible so that I could get on with my day. Instead, I stopped, I appreciated his attitude, and he remembered the magic I gave away for a whole year.

THE MAGIC OF (EFFECTIVE) LEADERSHIP

Can you imagine what would happen to a company culture if every employee felt as noticed and valued as this bellman did by my coin trick?

One of the programs I love doing with leadership teams is called the Magic of Leadership.

During the program, I teach everyone how to make a coin disappear from one hand and reappear in the other. After they learn the trick, I have them share it with their neighbor two minutes later. Most people don’t do it perfectly, but that’s not the point.

What matters is that they can understand something quickly and then share it with someone else. By the way, that skill is really important to corporations these days. Hiring managers are looking for leaders who can learn something new, implement it into their work, and turn around and sell it to a client or share it with a coworker.

As my program ends, I let everyone keep their 50-cent piece. Some people leave my workshop 50-cents richer. Other people leave with something much more valuable: magic they can share.

Every person you’ve ever met has something magical about them and their skillset. It might be a talent, a passion, a skill or a wealth of knowledge on a particular topic—and I guarantee that you have something magical and valuable to share too.

If you want to be an effective leader, ask yourself this: When was the last time you got up from your desk to share off for someone else? You might not consider yourself an expert, but you’re an expert to somebody. Maybe you’re an Excel wiz and you could help your coworker hammer out a spreadsheet in 30 minutes that would have taken them 3 hours on their own. Maybe you’re a wordsmith and could offer to edit someone’s important presentation. So many people have the power to share off, but they don’t want to spend the time or the energy.  The magic won’t happen and your leadership will be ineffective until you realize that your gifts are yours to give away—not to keep to yourself.

I was reminded of this when, two weeks after our ice cream date, I went to see my daughter in the starring role of Peter Pan at her school. When she came out to see us following her performance, do you know what the first thing I said to her was? 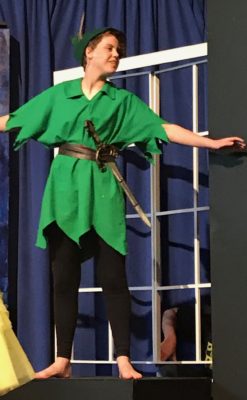 My daughter, Mirabelle, as Peter Pan

“Thank you for sharing off, Mirabelle.”

This time, she smiled. I think she got it.

What is your magic? Who should you be sharing it with? Besides the coin trick, my magic is helping people find theirs.  If you’re ready to maximize your magic to lead your team, launch a business idea or become a respected voice in your industry, I’d love to spend a day with you, and I’m offering a few one-on-one VIP Strategy Days this summer. Click here to learn more.